In case you were wondering if my affection can be bought with Italian food, the answer is absolutely. Suggested form of bribery: Crock Pot Chicken Marsala. 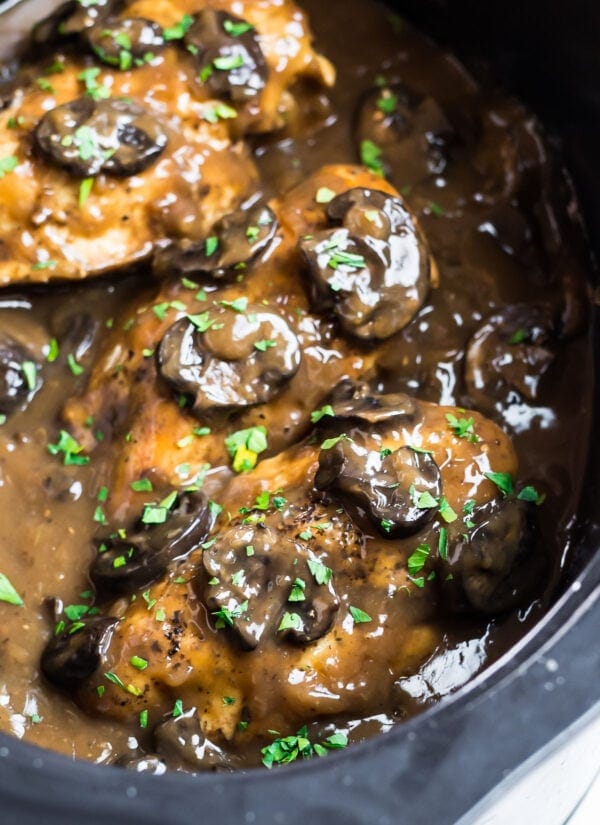 Traditional chicken Marsala is an Italian-American dish that has numerous iterations throughout Italy and the U.S. It consists of juicy seared chicken breasts in a creamy Marsala wine sauce made with garlic, shallots, and mushrooms. As that ingredient line up might lead you to suspect, it tastes heavenly.

{FYI: Marsala is a fortified wine made in Sicily, often used for cooking. It’s rich and nutty, and you can find it at almost any grocery store that sells alcohol or at liquor stores.}

My first taste of chicken Marsala was in high school, when my mom’s then-boyfriend (now husband of 12+ years) offered to cook dinner for her and her three angsty teenage daughters. I still feel for him. We were not a cordial bunch.

What I lacked in warmth, I made up for in appetite. It turns out that no matter how skeptical you might be of the guy dating your mom, if he feeds you chicken Marsala, it’s going to be impossible not to give him at least one more chance, if for no other reason than the hope he’ll cook you chicken Marsala again.

Today’s crock pot chicken Marsala is in memory of that night (and in honor of my step-dad, who I now happen to adore very much). It has the classic Italian flavors I remember falling in love with, but it’s lightened up with healthy ingredients.

Instead of heavy cream, the thickness of the Marsala sauce results from the slow simmering in the crockpot. The slow cooking method also means that this chicken Marsala is easy to make and the clean up is minimal.

I’ve been a fan of using the crockpot to make Italian chicken favorites ever since this Slow Cooker Chicken Cacciatore became a regular on our menu. I love that once I have the ingredients added, the crockpot does the rest of the cooking for me.

The post Crock Pot Chicken Marsala is found on Well Plated by Erin.