I try to temper how aggressively I toot my own horn around here, but OMG not one but two toddlers ate their entire servings of these Maple Bacon Brussels Sprouts and asked for second helpings. 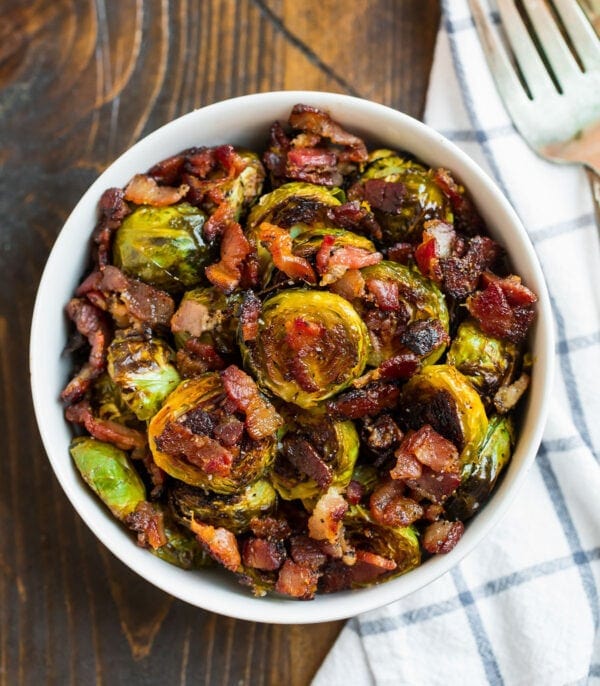 If you’ve been on the fence as to whether or not maple syrup and bacon can make absolutely anything—including vegetables as aggressively green as Brussels sprouts—delicious, the answer is absolutely.

Recipe testing days leave me with an abundance of leftovers, and I often share the wealth with our friends and their families. When I showed up at the door with these oven roasted Brussels sprouts with bacon, however, I wasn’t sure how the kiddos would react. Last I heard, B. sprouts were not a typical hit.

Toddler logic: these Brussels sprouts taste like pancakes (I conveniently omitted the detail that there’s just 1 tablespoon of maple syrup in the whole recipe). Both kids took a bite!

I hadn’t originally planned to share this recipe until a few weeks closer to Easter, when we’re all scrambling to figure out what recipes the pickier members of our families will enjoy.

Then, my friend’s sweet daughter asked when I’d be posting the recipe for maple Brussels sprouts so her mom could make it too. She looked truly distraught when I told her two weeks, which when you are five is the equivalent of two decades.

The post Maple Bacon Brussels Sprouts is found on Well Plated by Erin.