South Carolina Barbecue Hash is a unique South Carolina side dish typically made from pork and potatoes and served over rice. Once you get hooked on it, you can’t get enough. 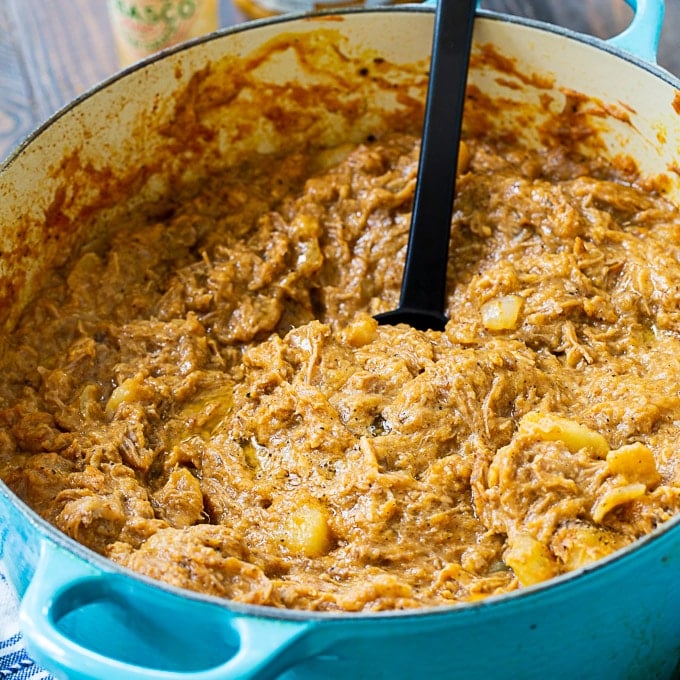 Hash is humble food, but one that many people have developed a deep and enduring affection for. It definitely falls under the category of comfort food.

There are many different types of hash throughout South Carolina and they vary quite a bit. Some are loose and runny, others rich and thick. Some are chunky, others are more like a paste. Some have a mild flavor, others have a strong liver taste.

Just about every restaurant in South Carolina has their own take on hash. This one is similar to the one served at Duke’s BBQ which has locations in Orangeburg, Beaufort, Ridgeland, Walterboro, and a few other places.

Some hash has things in it like pig’s hearts and kidneys and hog heads, but this recipe only contains pork butt. Traditionally, making a pot of hash was a way to use up the odds and ends and not let anything go to waste. 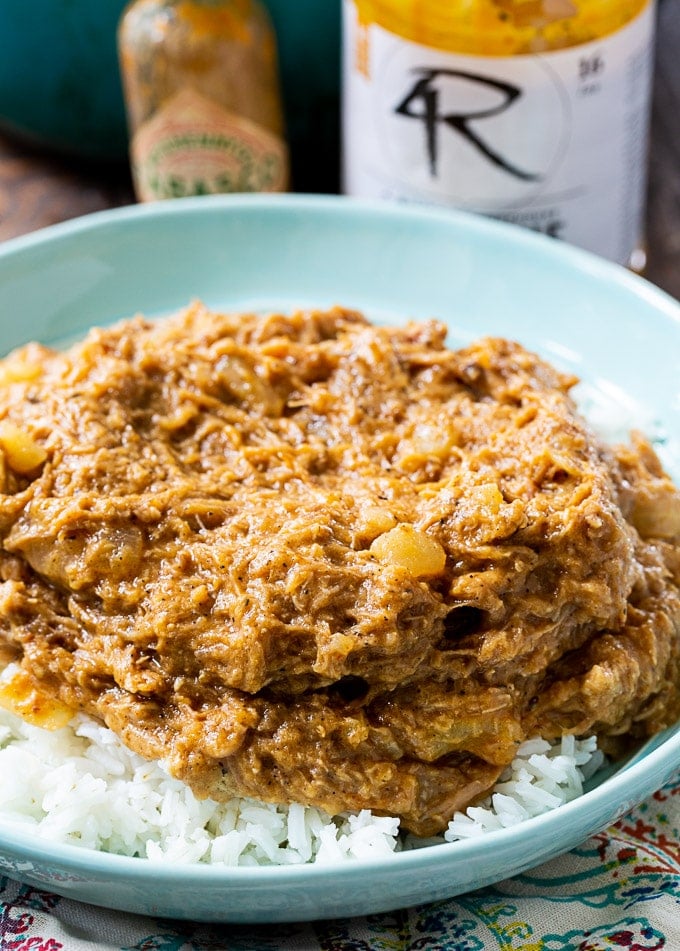 Typically hashes are at least slightly acidic and are either mustard based or mustard and tomato based. Usually they have potatoes and onions in them and they are processed in a food processor to break them down some.

To make this South Carolina Barbecue Hash, you’ll cut a 4-pound boneless pok butt into 6 pieces and season them well with salt and pepper. Sear the pieces in oil on all sides in a Dutch oven. Add onion, garlic, chicken broth and red pepper flakes and cook it in a 300 degree oven for 2 1/2 hours to get the meat nice and tender.

Next, you’ll shred the pork and set it aside. Pour the cooking liquid through a fine-meshed strainer and reserve it.

Next cook some onion and diced potatoes in the Dutch oven until the onion gets soft. Place the shredded pork on top of the potato and onion mixture. Pour in 1 cup of the reserved cooking liquid and simmer until the potatoes are tender.

Use an immersion blender to chop everything up well or transfer it in batches to a blender or food processor. You want to break it down a good bit, but don’t turn it into baby food. There should still be some texture.

Add in the ketchup, mustard BBQ sauce, vinegar, pepper, and hot sauce and simmer just long enough to give the flavors a chance to blend. Finally, you’ll stir in 6 tablespoons of butter which really adds a wonderful richness to the hash.

Serve over rice for one of the best comfort foods South Carolina has to offer. Leftovers reheat really well and it freezes well too. 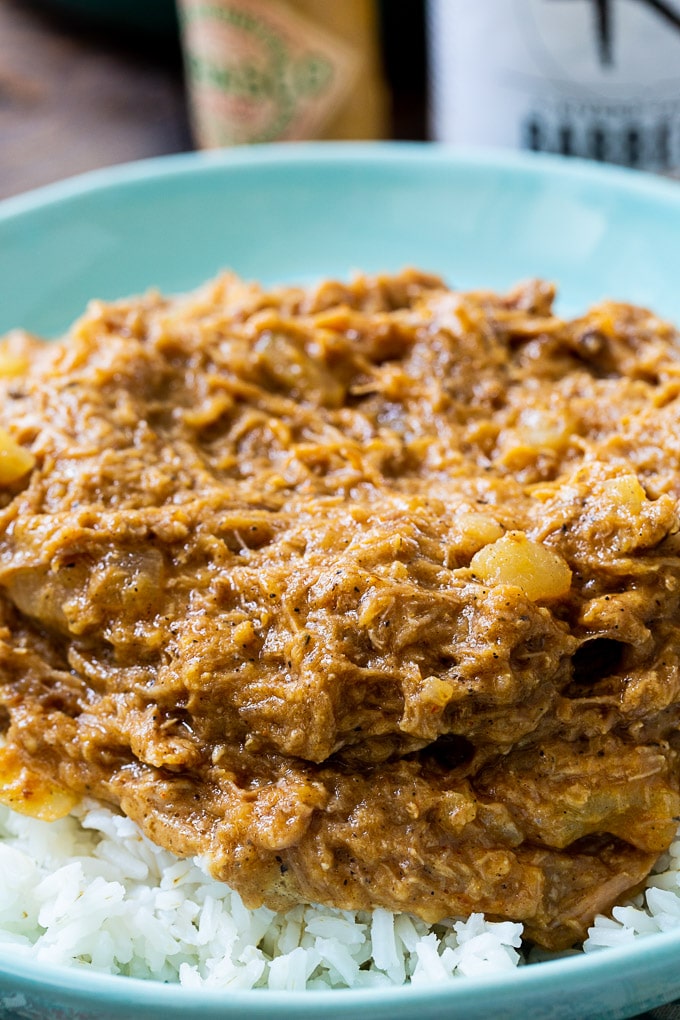 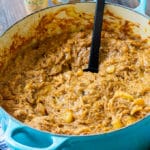 South Carolina Barbecue Hash is a unique South Carolina side dish typically made from pork and potatoes and served over rice. Once you get hooked on it, you can't get enough.
Course Side Dish
Cuisine Southern
Keyword pork
Prep Time 20 minutes
Cook Time 2 hours 45 minutes
Servings 12

Can be refrigerated for 3 to 5 days or frozen for up to 2 months. 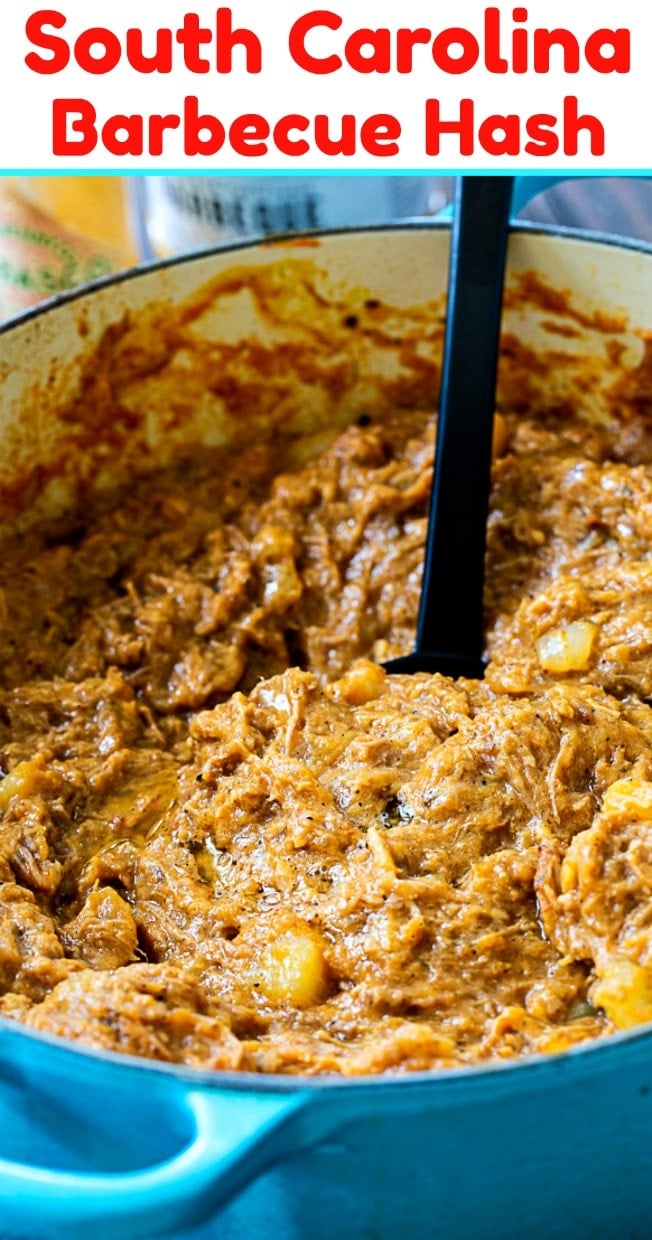